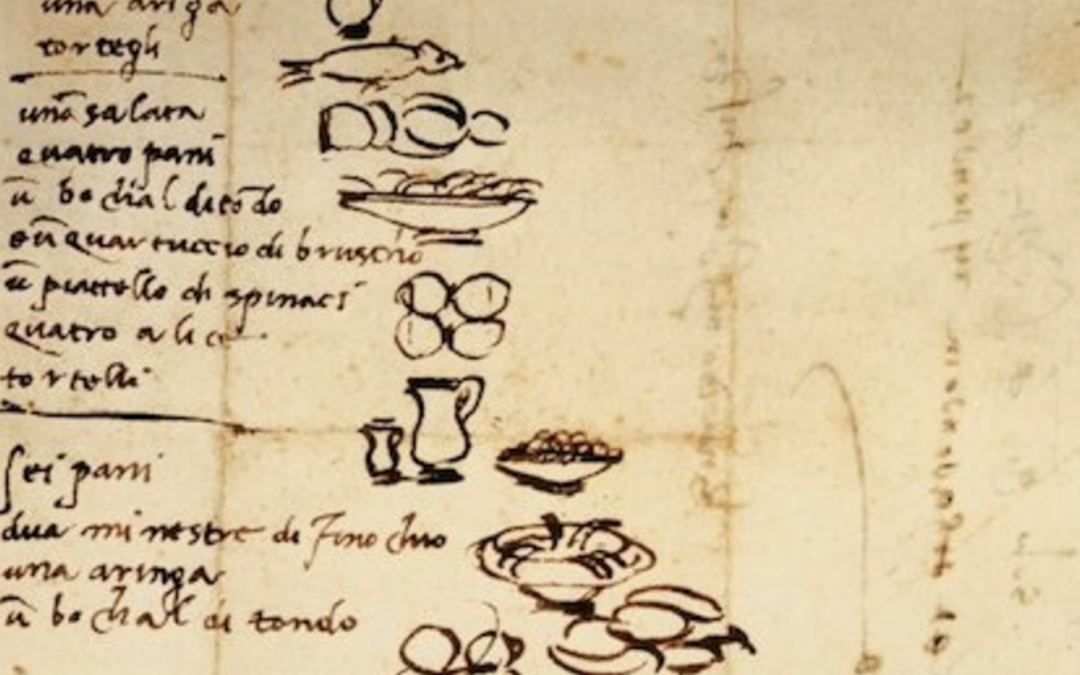 What, one may ask, does a genius Renaissance artist eat for dinner?

As a mad lister and journal writer it was a pleasure to recently discover a well-preserved illustrated 500-year old shopping list at the Casa Buonarroti museum in Florence “scribbled” out by the Great Michelangelo– to his servant–who was most likely illiterate. Dated March 18, 1518, this beautiful list was written on the backside of an old letter. By the same guy that painted the Sistine Chapel!

The curious feast drawn out by this reverential personality included foods that were to be spread out over three days of meals, including corresponding portions of bread.

An elegant herring floats in the air, while bowls overflow with salad and anchovies. Two dishes of stewed fennel are sketched side by side, and when asking for a smaller amount of dry wine, Michelangelo carefully drew a small wine jug next to a larger one.

This remarkable ancient shopping list consists mostly of vegetables, fish, wine, and bread. It’s been suggested that since it was written around the time of Lent, when eating meat was not allowed, he was clearly playing by the rules. Scholars also agree that this was a very upscale menu for an artist of the time, but Michelangelo surely spend many of his meals breaking bread with nobility.

It’s separated into three days by horizontal lines, and includes requests such as “pani dua” (two loaves of bread), “un aria” (a herring), and “un bocal di vino” (a quart of wine), tortelli, two fennel soups, four anchovies and so on.

“The list could surely go on, and there is nothing more
wonderful than a list, instrument of wondrous hypotyposis”
Umberto Eco, The Name of the Rose

As Kurt Buzard writes in his blog Travel to Eat, “We compose ephemera every day in the form of disposable to-do lists, directions to unvisited destinations, notes to people we know or have never met, and shopping lists of this kind. This kind of writing powers our ordered experiences, as ephemeral texts chart encounters before being rendered useless. Collected, disposable shopping lists create an archive of everyday artifacts that we can peruse for traces of the everyday both past and present. I thought I would present a few more examples and explore the origins of writing such lists.”

According to Wikipedia, Michelangelo was abstemious in his personal life, and once told his apprentice, Ascanio Condivi: “However rich I may have been, I have always lived like a poor man.” Condivi said he was indifferent to food and drink, eating “more out of necessity than of pleasure” and that he “often slept in his clothes and boots.”

What we certainly know about Michelangelo is that he was a perfectionist and never wanted anyone to see his work before it was finished. The survival of this list is astounding. Only around 600 of Michelangelo’s sketches still exist. The year 1518 is the same year Michelangelo burned many of his early drawings, and 46 years later, he ordered many of his papers to be torched in anticipation of his death.

In this down-to-earth-shopping list we see that not only did the true Renaissance Man pursue a variety of interests, but he applied his mastery equally to tasks exceptional and mundane. Which, of course, in this case, surely renders the mundane exceptional!

For further musings about this list, other genius lists and the origins of writing, check out Buzard’s the full story on Travel to Eat.