This time of dramatic social, cultural, economic change and cultural separation, as perhaps with all such eras, creates challenge and peril as well as the windows and energy for equally dramatic change. I am on a mission to experience other nourishing ways to travel and learn; providing enriching experiences for body, mind and soul.

This trip is completely sans alcohol.

On this trip in Southern Italy, just below the Amalfi Coast, we’ll discover lesser known parts frozen in time. The Cilento Coast. We’ll be based out of a magnificent villa nestled into the center of this stunningly beautiful village called Camerota.

Minus the glitter and glitz of the Costiera Amalfitana, this authentic jewel of a coastline awaits its fame. A string of craggy, sun-bleached towns, among them the popular
Agropoli, gleaming white Palinuro, and our precious home-base near the sea (Camerota and Marina di Camerota).

When it comes to its beaches, Campagna’s southern bookend boasts a combination of secluded coves and long stretches of golden sand. Greek temples like Paestum and Veglia — both astounding and without crowds. All of this, topped off with impressive daily monte e mare feasts, we’ll explore and celebrate Cilento’s unrivaled Southern charm and intense flavors. Cilento has been described as “foodie heaven” as it’s all about appreciating simple recipes that highlight the freshness of local ingredients. Some dishes, especially those that involve rich tomato sauces or rice, have trickled South from Naples. Others combine a few super-fresh ingredients to create a masterpiece of flavors. You’ll find vermicelli with anchovies and wild fennel; linguine with lemon; spaghetti with clams—pasta in this area is eaten very al dente, so expect to be served pasta with a serious ‘bite’ to it—or pesce all’acqua pazza, local fish cooked with a dash of white wine, a couple of cherry tomatoes, and a little garlic and parsley. Simplicity rules, as local cooks are convinced that fresh ingredients and a light hand yield unbeatable delicious plates. Other examples include sea bream cooked in a hard shell of salt or fish soup with mussels and scorpion fish heaped atop garlic-scented toasts that absorb the delicate fish broth.

We’ll learn the magic of how daily rituals and routines are infused in this local lifestyle with intentions to bring to ourselves and enrich our personal daily living–once back at home.

On this trip we’ll take daily walks including beach walks. We’ll meet locals and visit and cook in private homes. We’ll explore important monuments and historical sites. We’ll also take time each day to reflect, share and discuss all of our discoveries—from the inside–out. We’ll dig deeper to discover what it means to NOURISH ourselves in authentic, pure Southern Italian style.

*This tour is alcohol free.

We will not engage in wine tastings, serve wine or spirits with meals or at any other time. Casa d’Ambrosio has a light, airy, welcoming feel to it. Every room has been gorgeously decorated by Lorna herself. The colors are bright, organic, inviting and divinely relaxing. All the rooms are spacious; large balcony doors, and numerous windows offer light as the sun moves around the house.

But beyond the elegant, warm vibrations Casa d’Ambrosio generously offers, this gorgeous spot has a history deeply rooted in local family. Lorna’s husband Eugenio spent his Summers as a child playing in the streets of Camerota – the original birthplace of his great-grandparents, grandparents and a special repose for his own mamma.

The Story of Casa d’Ambrosio

In the mid 18th century Eugenio’s great grandfather, an innovative man from San Giuseppe di Piano (near Naples) named Felice d’Ambrosio came to Camerota to sell textiles from a mobile cart and then later set up shop in Camerota where he sold textiles. He met his wife, Fiorentina (from a nearby village, Licusati): a very tall, beautiful woman from a well-to-do family who was always elegantly dressed (locals claim she never left home without her high heel shoes!). They married and in 1896 Eugenio’s nonno Alfredo was born.

After WWI Alfredo married Ernesta and around 1921 they immigrated to Venezuela where Ernesta’s father was already living and had planted coffee and cacao. Alfredo’s two brothers Francesco and Medardo had already arrived in Caracas respectively in 1913 and 1919 and had started a business there. When Alfredo and Ernesta arrived, the three brothers established Hermanos D’Ambrosio– exporting all things Italian from Italy to Venezuela. Years later Francesco and Medardo die prematurely and Alfredo carried the business forward all on his own.

On occasion, Alfredo returned to Camerota where he brought gas heat, one of the first televisions in the village and the first telephone communication. Before that the local villagers had not experienced such luxuries. Alfredo was admired and adored by all. He and his brothers were responsible for funding and building the village cemetery. Alfredo himself funded the restoration of the main church in town.

When Ernesta and Alfredo returned to Italy, first they lived in Salerno and then in a village north of Salerno called Cava dei Tirreni. Ernesta died there and Casa d’Ambrosio was used as a Summer gathering spot for Alfredo, his children and grandchildren. After the death of Alfredo in 1976 the entire house was divided up in the early 1980s amongst Eugenio’s aunt, uncle and his own mother Flora–who took the middle part of the house and the most historically intact. It was restored and updated at that time.

Over the years, the house remained in the family and mostly empty and unused. Eugenio’s mother Flora used the property sparingly in summertime until after her death when the house was dropped into the loving hands of Lorna and Eugenio. And, through their extensive adoration and sentimental attachment to the house, the fascinating family history and the house’s location in this long-forgotten, but extremely special village–Lorna and Eugenio have created their own interpretation and remembrance of place, time and Camerota’s former generations, love and livelihood.

This is Casa d’Ambrosio.

As a maestra of authentic tours featuring Italy’s time-honored traditions, the discerning experiences that Carol Sicbaldi shares as a tour designer/tour leader – will push you to explore a life of simple pleasure, uncomplicated flavors, bucolic landscapes and architecture from a time when things were built to last. Take your pick from trekking, authentic home cooked meals, pop-up picnics and wine tastings. With over 25 years of experience, she’ll introduce you to artisans whose life’s work is dedicated to keeping their chosen crafts alive, from cheese makers to bakers, honey producers and herbalists.
With Carol, we’ll practice celebrating a simplicity long lost in most corners of the world.
Slow down, walk, and appreciate all the rhythm and flavors!
www.carolsmoveablefeast.com 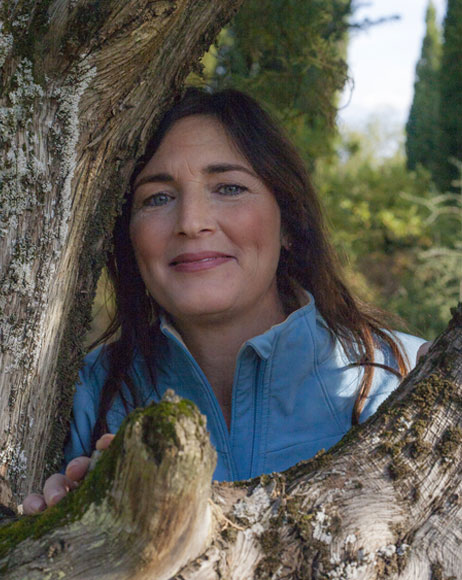 “Visiting a new town is like having a conversation. Places ask questions of you just as searchingly as you question them. And, as in any conversation,
it helps to listen with an open mind, so you can be led somewhere unexpected.

The more you leave assumptions at home, I’ve found, the better you can hear whatever it is that a destination is trying to say to you.”